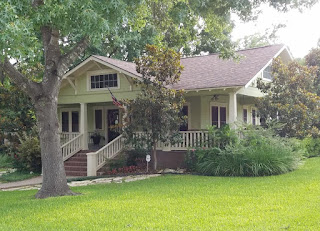 The Austins added an addition at the back of the house that gives them a garage and guest bedroom, as well as a master bathroom and more kitchen space. But the addition and other renovations have stayed true to the original craftsman style of the home. I love every opportunity I get to see this house!
Posted by Ellen Davis at 1:46 PM